Horse Legends and Myths (elf knots and other horse tales) 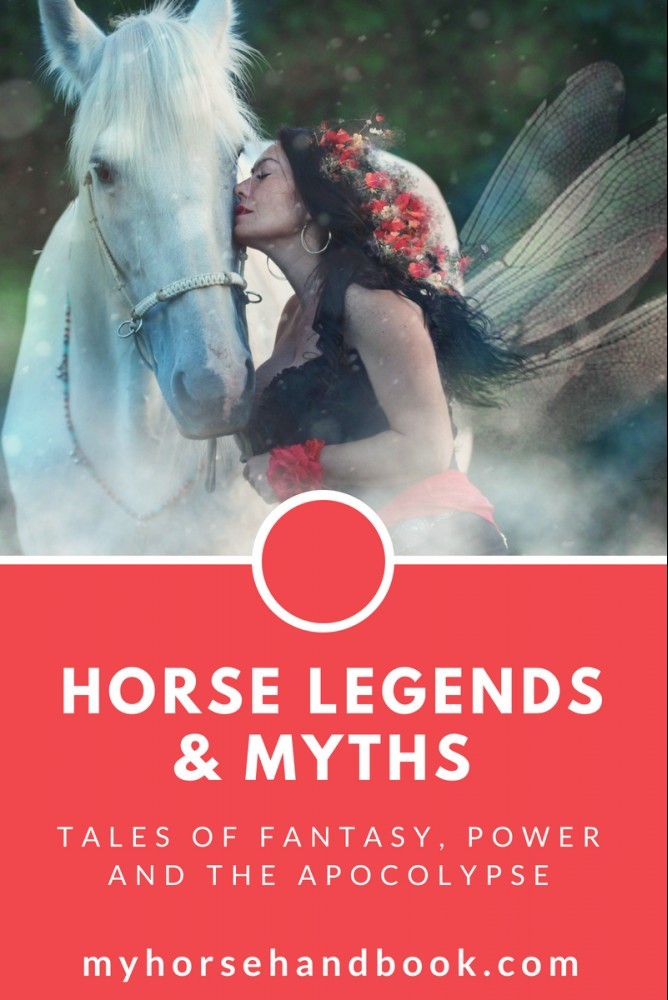 I am feeling a little whimsical today after spending a fantastic weekend with my wonderful horses.

With so many horse legends and myths surrounding our equine friends I thought it might be a bit of fun to delve into the fantasy world of horses.

Like most horse people I have been enamoured by the thought of horses since I was a young girl. I was the crazy kid cantering about the backyard wishing and hoping for a pony for Christmas.

My days were filled with tales of unicorns prancing across green fields and knights rescuing princesses and riding off into the sunset.

There is something majestic about our equine friends, and when you look into the eyes of a horse you do indeed see a reflection of your soul.

Maybe this is why horses feature so highly in many cultures, from heroic deeds in support of their masters to tales of impending doom.

This section was triggered by a friend of mine’s horse who has these knots in her mane. Now my friend is a fastidious horse owner, her horses are well-loved and cared for and when I noticed this knot in her mare’s mane I thought it odd.

“Ohh that’s an elf knot” she said. A WHAT?
I had never heard of an elf knot, also called witches knots or fairy knots and so I was intrigued.

There are a couple of variations to the tale.

One of which is that fairies or elves come in the night and twist the horses mane to form either stirrups or reins to enable them to ride the horse during the night.

It is apparently bad luck to untwist the mane, I am assuming because the fairies return and then have to redo all their hard work before they can ride again, so get a little grumpy.

Some tales elaborate that if you leave your horses mane braided the fairies will think more highly of your horse and ride them well.

In other folklore it is said elf-locks occur in sleeping children as the fairies and elves play in their hair overnight and make such a mess as to leave the child with horrible knots, impossible to comb out.

Elf Knots are also attributed to Shakespeare’s Romeo and Juliet as the bard describes:

“She is the fairies’ midwife, and she comes
In shape no bigger than an agate stone
That plaits the manes of horses in the night
And bakes the elf locks in foul sluttish hairs,
Which once untangled, much misfortune bodes.”

Another version I found on a very interesting forum site called Historum elaborates on a story known as the “Wild Hunt” and is attributed to 10th century European folk law. In this tale the spirits of deceased royalty attend the stables and choose the fleetest and most reliable mounts to ride that night in a hunt for trolls or beautiful maidens. They too need to twist and knot the mane to provide a good hold as the hunt is fast and furious.

The hunt is led by either the Germanic god Wodin or in an all female version of the story the Goddess Diana. It is thought the reference to the Goddess Diana as an ëvil woman” may have led to the knots being described as witches’ knots.

In another very tongue in cheek blog the braids or knots are said to be caused by Bigfoot or at least the younger, lighter children of Bigfoot who also ride the horses in the night. You can read the article on www.historum.com

I personally like the first tale and my imagination creates fairies winging around the stables chattering to each other about the virtues of each horse before they pick a horse to ride that night, and then twisting their manes to create points to hold on to before they gallop off into the moonlight on their chosen horse.

Throughout many cultures there is reference to a winged horse. In our European heritage probably the most well-known is Pegasus. 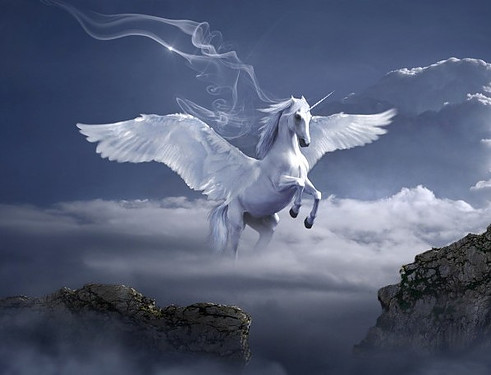 Stemming from Greek mythology Pegasus is the winged white stallion, said to be the son of the God of the Sea, Poseidon and the mortal Medusa.

Pegasus is represented as being a goodhearted, gentle creature, somewhat naive but always eager to help.

The myth elaborates that Pegasus was born when the blood if his mother Medusa mixed with the waves and foam of the sea.

On his birth a great clap of thunder and lightning pierced the sky and this is how he came to be connected to the forces of the sky.

Pegasus was raised by the Muses at Mount Helicon, where he is said to have struck the side of the mountain with his hooves and caused springs of inspiration to appear.

Later it is said that the Goddess Athena tamed the horse and gave him to Perseus (who as a sideline had actually killed Pegasus’s mother).

Pegasus also became the mount for Bellerophon who slew the mythical creature, the Chimera, and then attempted to fly Pegasus to Mount Olympus. On his journey Bellerophon fell from his horse, some say he was bucked off, some tales say he grew giddy from the sheer height and fell.

Either way, Pegasus continued to Mount Olympus alone and served his new master, Zeus until his last day. It is said that Zeus gave Pegasus his place in the stars to reward him for his life of dedication. And that is where the constellation of Pegasus came from.

The Four Horsemen of the Apocalypse 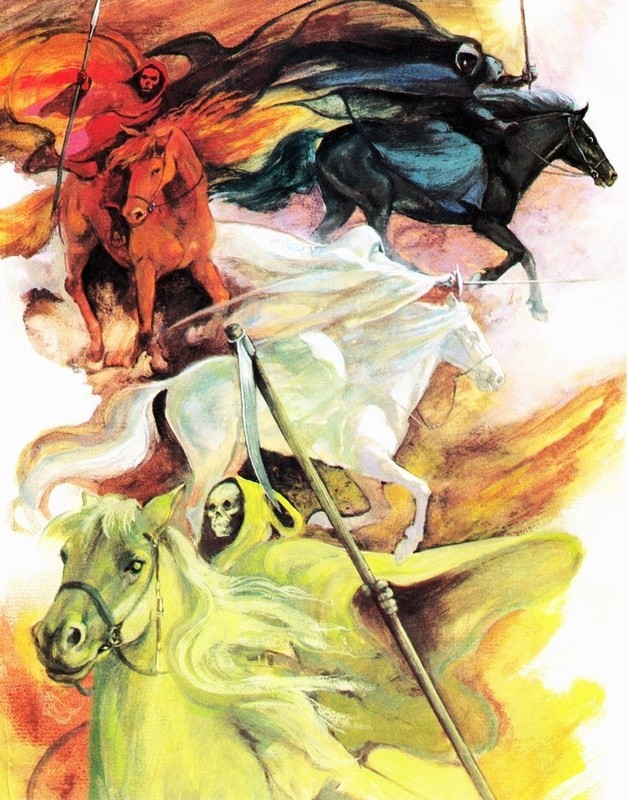 Of Christian descent, the four horsemen riding their four horses appear once Jesus Christ (referred to in the Testament as “the Lamb”) removes four of the seven seals on a scroll held in God’s right hand.

Always referred to as the harbingers of doom and the instigators of the Apocalypse, it is said that when the four horsemen appear again it will be the end of days.

The four horses were white, red, black and pale yellow and are said to represent Conquest, War, Famine and Death respectively.

The excerpts below are from Revelations and make for interesting reading:

“I watched as the Lamb opened the first of the seven seals. Then I heard one of the four living creatures say in a voice like thunder, “Come and see!” I looked, and there before me was a white horse! Its rider held a bow, and he was given a crown, and he rode out as a conqueror bent on conquest”. ( Revelation 6:1-2)

“When the Lamb opened the second seal, I heard the second living creature say, “Come and see!” Then another horse came out, a fiery red one. Its rider was given power to take peace from the earth and to make men slay each other. To him was given a large sword”. ( Revelation 6:3-4)

“When the Lamb opened the third seal, I heard the third living creature say, “Come and see!” I looked, and there before me was a black horse! Its rider was holding a pair of scales in his hand. Then I heard what sounded like a voice among the four living creatures, saying, “A quart of wheat for a day’s wages, and three quarts of barley for a day’s wages, and do not damage the oil and the wine!” (Revelation 6:5-6)

“When the Lamb opened the fourth seal, I heard the voice of the fourth living creature say, “Come and see!” I looked and there before me was a pale horse! Its rider was named Death, and Hades was following close behind him. They were given power over a fourth of the earth to kill by sword, famine, and plague, and by the wild beasts of the earth”. (Revelation 6:7-8)

These are just three of the many references to horses in our history and folk law. As you can see horses have been a source of fantasy, power and fear throughout the ages.

I hope you have enjoyed our dip into Horse Legends and Myths, with so many tales it was hard to keep this short so if you have any suggestions for a few more please comment below and we can add them as time permits.

How To Retrain A Racehorse [My Retired Racehorse Project]

Horses are my passion. And while not everything in horses is black and white, and there are many choices you will need to make for your horse, I hope to explain things in a way that helps you make informed decisions, so you can provide the very best life to your horse.

Great shopping for my US Pals Or if you live in the UK

This website created at Wealthy Affiliate University. Would you like to join a wonderful online community and turn your passion into income? If so click the image below. 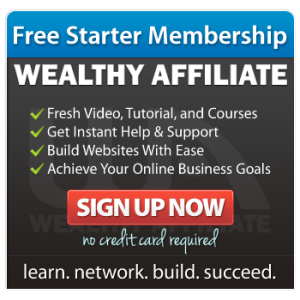 My Horse Handbook has an affiliate relationship with some, not all, of the companies and products that appear on this site. As an Amazon Associate My Horse Handbook earns commissions from qualifying purchases.

This means there is no additional cost to you and I receive a small commission should you buy from the link, which of course I appreciate very much.

Believe me I know horses can be expensive, I have two of my own, so please do not buy anything you do not need or can’t afford. I provide the links so you can easily find products or seek any additional information you may need.

Please log in again. The login page will open in a new tab. After logging in you can close it and return to this page.